You are here: Home › Composer 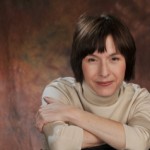 Leanna Kirchoff has been writing music since a young age growing up on the high plains of eastern Colorado.  Her earliest musical influences were piano lessons and accompanying the choir at her local church, experiences that have shaped her development as a composer.  She describes her music as a pathway through poignant moments, soulful reflections and beautiful ideas.  Kirchoff’s catalog of compositions includes opera, song cycles, choral music, vocal and instrumental chamber music, and musicals.

Most recently, Kirchoff, along with librettist-composer, Rachel J. Peters, is the recipient of an Opera America Discovery grant for 2018 in which they will be working on a chamber opera about experiences of Syrian women amidst the ongoing war.  Two workshops of the opera will take place in 2019.

Other opera projects have included her mono-opera exploring the psyche of a murderous judge, To See That Red Thing Flow, premiered by baritone Jeffrey Williams at Austin Peay State University (TN) with a preview Halloween performance on Nashville Public Radio’s Live in Studio C.  Indiana-based trio, Soprani Compagni, commissioned and performed her micro operetta, Scrapbookers, for their symposium, “Portraits of Women in Contemporary Soprano Duet.”  They have also performed the work at the 2017 International Congress of Voice Teachers (Sweden) and at venues in the United States, China, and South Korea.

Kirchoff received the Sorel Medallion, an international choral composition prize for her choral piece, Meciendo.  The award culminated in a performance at Carnegie’s Zankel Hall by New-York based Voices of Ascension.  Other notable performances of Meciendo have been at the American Choral Directors Association conference in Kansas City and the Colorado Music Educators Association conference.  Kirchoff has also held an American Composers Forum Faith Partners Residency, composing choral pieces for Boston area Temple Emanuel Synagogue and Twelfth Baptist Church.  Early in her career, she won the Denver Women’s Chorus National Composition Competition.

Expanding upon her work as a composer, Kirchoff has created visuals for A Recurrent Dream While Driving West Near Sand Creek, a recent audio-visual piece with composer Chris Malloy on the topic of the Sand Creek Massacre.  The piece was showcased at the International Congress of Science and Music Technology in Buenos Aires, Argentina and also will be shown at the Sangre de Cristo Arts Center (CO) in Spring 2018 for the exhibition, “Representing the West:  A New Frontier.”

Kirchoff completed her Doctorate of Musical Arts degree from the University of Colorado, where she studied composition with Daniel Kellogg, Carter Pann, Michael Theodore and Richard Toensing.  She also holds a Master of Arts in Composition from the University of Minnesota where she studied with Dominick Argento and Judith Lang Zaimont.  She has been a composition fellow at the John Duffy Institute, the Ernest Bloch Festival, the Rural America New Music Festival, and the Chamber Music Conference and Composers Forum of the East.

A faculty member at the University of Denver, Dr. Kirchoff teaches composition seminar as well as directs the Lamont Composers Concert Series.  Complete information about her music, performances, recordings and news is available at www.leannakirchoff.com.